Why Shouldn’t I go? 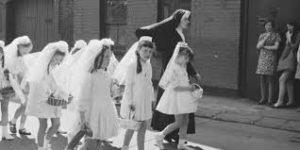 ‘Why Shouldn’t I Go?’ written and performed by Janet Behan, directed by Jessica Higgs.

Funny, moving and absorbing this one-act play tells the stories of three very different Irishwomen. They have one thing in common – religion and the impact it has had on their lives. Janet says, “Each woman started out as hopeful, bright-eyed and brave but each of them had their youthful optimism blighted by the prevailing constraints in their different communities. These are women of my generation, living every day with their own particular pain and loss.”

Janet’s play about her uncle “Brendan at the Chelsea” starred Adrian Dunbar and toured to London, Belfast, New York and Dublin.