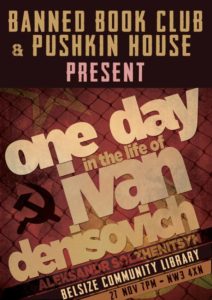 Pushkin House specialises in Russian Culture with freedom of speech as core principle. They will be at our next Banned Book Club and tell us about the incredible work they do.

A Day in the Life of Ivan Denisovich will be our starting point.

The short novel by, Nobel prize winner, Aleksandr Solzhenitsyn,  is one of the most extraordinary literary documents to have emerged from the Soviet Union and confirms Solzhenitsyn’s stature as “a literary genius whose talent matches that of Dosotevsky, Turgenev, Tolstoy”–Harrison Salisbury.